These two sexpots had been rivals since their “Mickey Mouse Club”days, so when they teamed up to pay tribute to Madonna by donning her famous bridal gear for a duet of “Like a Virgin,” her-story was being made. But that newsworthy detente was overshadowed when Madonna herself emerged, in some equivalent of groom’s wear. In an instant, it was clear who still wore the pants in the diva world. If you forgot that Aguilera was even in on this, you’re not the only one. After Madonna got smoochy with Spears, the cameras cut away to the latter’s ex-boyfriend, Justin Timberlake, in the audience. By the time Madge moved on to Aguilera seconds later, the Christina kiss had already been rendered anticlimactic. But little did we know that neither of the young acolytes were even MTV’s first choice to play Madonna’s fellow lipstick lesbian. “They werent necessarily the first couple of people who were on the hit list,” MTV Music Group president Van Toffler told EW last year. “Originally J.Lo was in the mix. That didnt happen.” (Obviously we’d remember.) “And the thing about Britney and Madonna was they had [bad] history, so it was not easy to get them together on the stage. Both Britney and Christina obviously respected Madonna, so only she could pull that off. Bringing irreconcilable divas together for an important cause truly established MTV as the United Stations of fake lesbianism. Little remembered is the fact that Missy Elliott was also onstage for this medley, shunted off to the side for the most important moment. Even less remembered is that Elliott won Video of the Year that night. 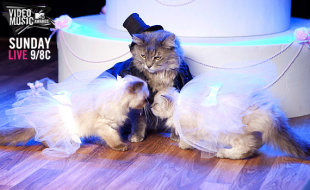 . . Christina Aguilera (Getty, Bauer Griffin)Just in time for MTV’s Video Music Awards, we’re taking a look back at our favorite genie in a bottle. Yup! Ms. Christina Aguilera . The pop star’s style transformations are unrivaled. From afros to bobs, camo pants to glitzy gowns, she’s tried every extreme. While her fashion sense has matured, and her hair and makeup have been tamed, she continues to fearlessly throw herself into an array of bold looks. In other words, girlfriend keeps us on our toesand for this we love her. While we eagerly await this year’s VMA red carpet extravaganza, dig into this petite bombshell’s most jaw-dropping before and after moments.