General Assembly on September 25 to discuss the crisis, which he said needed to send a clear message. Former colonial power France – which intervened earlier this year to oust Islamist rebels from another one of its former colonies, Mali – has been reluctant to get directly involved in the crisis. It has urged African nations and the African Union to do their utmost to resolve the crisis among themselves. But while the African Union plans to deploy a 3,600-strong peacekeeping mission – known as MISCA – in the country, incorporating a regional force of 1,100 soldiers already on the ground, it is unlikely to be operational before 2014. The African Union has asked financial, logistical and technical support from the United Nations and senior U.N. officials recommended last month that the U.N. Security Council approve this request. The African Union and United Nations planned to send experts to the Central African Republic to assess exactly what was needed and U.N. diplomats said that on the basis of those reports the Security Council would respond with a resolution. U.N. envoy to Central African Republic, retired Lieutenant General Babacar Gaye, and U.N. Assistant Secretary-General for Human Rights Ivan Simonovic both last month signaled to the Security Council that the AU force would not be enough to combat the crisis in the country, which borders six other states.

diplomats call a “trigger” clause for automatic punitive measures in the event of Syrian non-compliance, prospects for an agreement between Russia and the West on a draft resolution may be improving. U.N. diplomats told Reuters on condition of anonymity that all discussions on the draft resolution were on hold until a bilateral meeting on Tuesday between U.S. Secretary of State John Kerry and Russian Foreign Minister Sergei Lavrov at which Syria will be among the topics of discussion. Speaking to reporters in New York, French Foreign Minister Laurent Fabius appeared to confirm France’s willingness to accept Russia’s demand that the draft resolution not be enforceable under Chapter 7. According to the Geneva agreement, the Security Council would have to adopt a second resolution in order to punish Syria for any non-compliance with the U.S.-Russian plan to eradicate Syria’s chemical arsenal. “We should take exactly what was foreseen in Geneva. On that basis we should come to an agreement,” Fabius said. DEAL FOLLOWED U.S. THREAT The U.S.-Russian deal followed threats by U.S. President Barack Obama to carry out military strikes against Assad’s forces in response to an August 21 chemical weapons attack on civilians near Damascus. 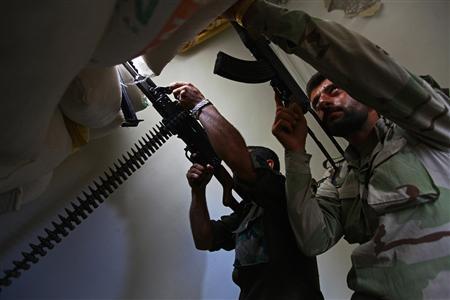 “It’s not normal that you can carry more than a ton of cocaine on an Air France plane,” he said Monday on Europe-1 radio. “The fight against drugs requires all the players, notably transport companies, to participate in this cooperation.” Valls said police knew where and to whom the drugs were heading but wouldn’t divulge the information or provide details on who was arrested. His Venezuelan counterpart, Miguel Rodriguez, told reporters that “mafias comprised of Italian and English citizens” were involved and that French police had been tracking them since July. The Paris prosecutor’s office said the six people in custody were to appear before a judge Tuesday to determine whether they would be charged. A spokeswoman said none were French but would not discuss their nationality. Britain’s Foreign Office said three Britons were among those arrested. Rodriquez said authorities had interviewed more than 15 people and “in the coming hours we will surely be announcing more arrests.” On Sunday, police arrested two National Guard sergeants and the lieutenant assigned to counterdrug duties the airport when the incident occurred and Rodriguez said authorities “presume complicity at the airline.” He noted that each of the 31 suitcases would have been far over the usual maximum baggage weight allowed at an average of more than 40 kilograms (88 pounds) each. The Colombian cocaine was placed on Flight 368, which departed on Sept. 10, and seized the following morning at Charles de Gaulle Airport, he said. Air France said it was working with police and conducting an internal investigation. The baggage tickets had fake names, said Alejandro Keleris, director of Venezuela’s counterdrug agency. There was no explanation given for why authorities waited nearly two weeks to announce the seizure. Michael Shifter, president of the Inter-American Dialogue think tank in Washington, said the case supports U.S. accusations of high-level support for drug trafficking in Venezuela’s military as it was unlikely two sergeants and a lieutenant acted alone.